Troubleshooting Tips for your Butane Torch

Sometimes, as your butane torch gets older and well used, it stops working. Usually, this means that the automatic ignitor has stopped working and the torch doesn't light. Before you throw that torch away, try these tips to fix it!

You can also catch some of these tips on our free video that I made with Beaducation: Butane Torch Safety. Troubleshooting starts at 15:56.

Please, before you work on or use your torch - wear safety glasses! It just makes sense. And never use a torch that is misbehaving so badly that it feels unsafe.

Sure, it seems obvious, but sometimes the torch won't light because the gas lever is turned down. Turn the gas dial to maximum and try lighting again. Maybe it just wasn't getting enough butane to spark! 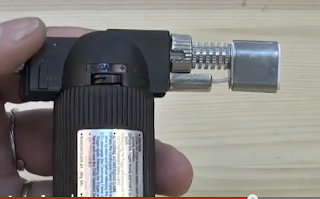 Another culprit is a lack of oxygen, which along with the butane can help the torch ignite. On some butane torches, there is a silver or black sleeve on the nozzle that rotates, opening and closing a vent that allows oxygen to mix with the fuel. If it's closed, the ignitor may not be able to spark the butane into a flame. Open it all the way and try again. 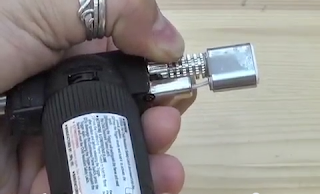 The ignitor might be broken or clogged. How can you tell? Use a manual torch lighter, also called a sparker, to try lighting the torch. Start up the torch as usual, holding the trigger down to keep the butane flowing. Place the cup of the sparker a couple of inches in front of the nozzle and slide the flint back and forth to make a spark. If the butane lights, then the torch is fine, but the ignitor isn't working. Most torches require an external tool like a sparker to light them. Don't waste this torch just because the ignitor isn't working. Use the sparker instead. In fact, sometimes the problem is temporary, and I've seen the ignitors come back to life, days, weeks or even months later. 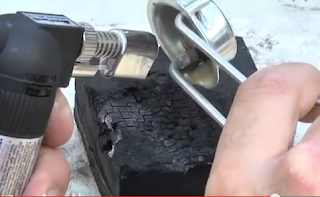 Not all butane is created equal. Cheap butane is oily and can clog your torch, preventing it from lighting. Check the opening of the nozzle for residue. If it's dirty, try cleaning it with a cotton swab or pipe cleaner, and maybe a little rubbing alcohol. Be sure to let the alcohol evaporate away completely before trying to light the torch! If that doesn't work, you may have to empty the torch and refill it. We've seen torches function better as their fuel is gradually replaced with better quality, premium butane. To speed things up, empty the torch by turning it on and locking it, so that the butane is venting out. This is best done outside in a safe place where the torch won't be disturbed for 20 - 30 minutes. If the torch ignites while you're trying to vent it, the flame can be blown out with a strong puff of air - from your mouth. Just keep your lips away from the heat! Once the torch is empty, refill it with the good stuff. Let it rest for 5 minutes, and then try it again.

This is a real life problem that has happened to me with large flame butane torches. The torch won't ignite - even with a sparker. When I checked the nozzle, the brass part inside was missing. This seems to work like a choke or something similar to make the butane focused enough to spark. Without it, your torch won't work. Often, when I look around, I'll find the little guy on the floor or on the bench. Replace it in the nozzle, pressing it in firmly with your tweezers. Usually works like a charm! 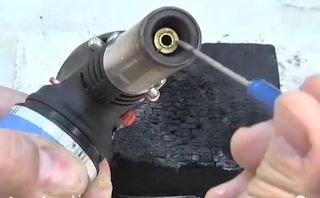 Have you ever noticed butane bubbling out of the nozzle or the fuel port on the bottom? This is a good sign that the torch is too full or that it's damaged. If the torch is too full, the pressure has to release somehow, so butane will bubble and spit out, usually from the fuel port. You can release the pressure by pressing on the little nipple inside the fuel port with a flat head screw driver or something similar. A jet of butane will come out. Check for butane spittle. Repeat until the dribbling stops. If it doesn't stop, your torch is probably damaged and shouldn't be used.

Does the torch light but the flame goes crazy, losing it's focused blue shape and expanding into a yellow tipped blow torch? Well, first, turn it off. Something is obviously wrong. It may be temporary or the torch may be broken. A temporary problem would be an air bubble in the fuel line. This will either keep the torch from lighting or cause the flame to sputter and expand, usually ending by putting itself out. If it's an air bubble, one of two things will solve the problem: time or patience. Over time, the bubble will work its way out and the torch will work again. Maybe 20 minutes to a few hours. If you can't wait, try running the torch in a safe place where the big flame won't cause any problems. Re-ignite the flame as necessary until, after much patience, the flame settles back to normal.

If it never stops misbehaving, the problem may be a little more serious. Press the trigger down half way, enough to start the butane flowing, but not enough to ignite the sparker. Do you see a jet of liquid butane coming out of the nozzle? If so, release the trigger. Something is wrong and the torch is spitting liquid butane in a way that is messing up the flame. What to do? Try steps 4 and 6 to release pressure or change butane. If that doesn't work, the torch may be too damaged to use.